Fight for your right to repair

Repairing is less expensive than buying new tech, but access is key 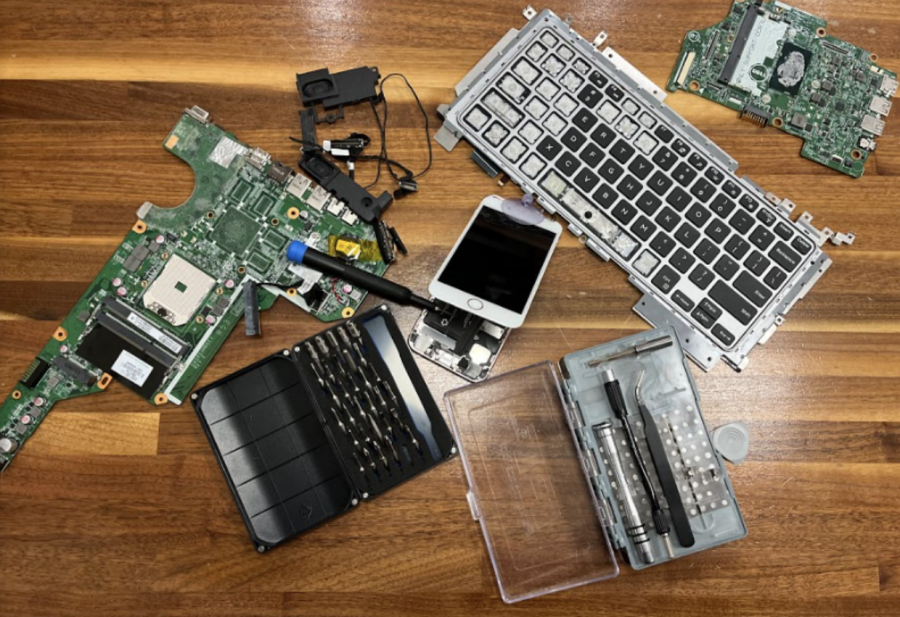 Tool Time: A pair of laptops, motherboards and IPhone all in need of a little work. “Repair shops were once a common staple in most every town. Skilled people still fix things, though it gets harder and harder for them to make a fix worthwhile as goods get cheaper and devices get harder to fix,” Kevin Purdy, an editor for ifixit.com said. Photo illustration by: Adam Chodowski.

There are a lot of complex things around us from the device in our hand to the car in your driveway. What a lot of us often don’t realize is that these devices are really expensive to repair, especially when we have to give it back to the manufacturer. One common example is a phone repair. It costs nearly 50 dollars to replace an iPhone battery at the Apple Store. Meanwhile, one can do it at home for 35 dollars, when parts are available. However, the right to repair is not just about being able to repair something the way we want it to be repaired. It is to give ourselves more options and keep products out of the landfill longer.

While this probably does not sound like something important to you; however, there is way more to it than just fixing our stuff. This is especially true for students who are passionate about this topic.

“Right to repair is a movement that seeks to bring back the part of our culture to repair our own stuff and to choose if you want to or not,” Louis Rossmann, a repair shop owner in NYC  and expert on the subject, said.

That is the simple answer, if you want to get more technical it goes beyond just culture to tools and parts.

“It demands that any company that offers parts, tools, repair guides, and software tools to its own repair workers to make those available to individuals and repair shops,” Kevin Purdy, an editor for technology website IFixit, said. “Lack of access to repair should not doom us to tossing out items that would work fine with the right fix.”

Some of the benefits have nothing to do with keeping stuff longer. There are also benefits to one’s mental health while in the process of repairing their devices.

“I think that besides having an increase in people fixing their stuff, the diagnostic part of their brain to solve these problems is changing their intelligence and increasing their chance of becoming an engineer or doing better in school,” Rossman said.

Some major changes have come recently, companies like Fairphone and Framework have popped up making easy to repair devices. While others like Microsoft and Apple have reevaluated their stances but still have yet to take action. When it comes to influencing change, everyone can help.

“The real answer is to get someone else to feel the joy of repairing,” Rossman said. “Solving that puzzle after 45 minutes is a great rush of dopamine and the third is seeing the smile on other faces when you fix their item, those are the rewards of the right to repair. Let someone figure it out for themselves.”

That is not a bad idea as nearly 70 percent of 35 students who participated in the survey said they know little or nothing about the subject. However, that does not mean students have no interest.

“I have not heard about it, but it sounds interesting,” Neave Lynch (10) said.

Being curious is not a bad thing. So, if you are not tech savvy or a fan of fixing your stuff, just knowing things like this give you more options or can save you some money. One of the best examples is replacing your phone screen. Replacing an IPhone screen could cost you $129 at the apple store but just $80 if you bought your own parts and tools. If you want any more information or are looking for part tools and guides to fix your stuff check out IFixit.