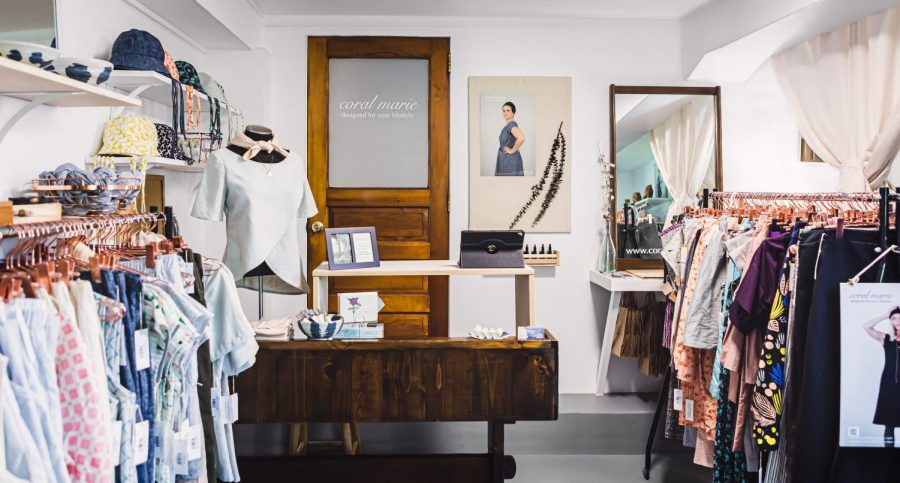 Sustainable garments: Coral Wedel opened Coral Marie to promote slow fashion which she has had major success in these past few years. Photo contributed by: Coral Wedel/Image by: January Heuss Photography LLC

“Originally I created Coral Marie as a way to structure my studio practice and kind of grow it into a more intentional sustainable lifestyle brand,” Wedel said.

Wedel has been interested in slow fashion for a long time and she attended the School of the Art Institute in Chicago for her degree in fashion design. Shortly after she graduated from university, she went to work in Los Angeles.

Wedel was able to experience firsthand how the industry impacted people, which really influenced her view on the fashion industry. Additionally, Wedel did not like knowing the effects that the industry has on the environment.

“The industry’s impact on the planet is very important to me and the fashion industry has a pretty key track record,” Wedel said.

Despite these issues with the industry, Wedel wanted to continue her career in fashion design while making her clothes more sustainable.

“It’s my industry. That’s what I love and I have a passion for it,” Wedel said. “So I guess my personal perspective is I want to do what I love and care about in a way which is respectful and cognizant of all the working parts.”

Wedel has a strong belief that if more people knew about the slow fashion industry and began participating in it, there would be a very positive output on the public and the environment.

“The fashion industry has done a really good job of making it a removed process from the consumer,” Wedel said. “I don’t mean that as a positive but they have done that and the industry as a whole is not very transparent. What that means is the end consumer doesn’t really feel any responsibility for the impact of that purchase because they don’t see the production process.”

According to Wedel, the industry has almost hidden the process of how the garment was made because many people do not know what the process is for constructing an item of clothing or what it is made out of.

Therefore, Wedel prefers to get her fabrics from local producers so she avoids the issue.

“I choose to produce in a localized manner the way that I do because it keeps my products local,” Wedel said. “I have to protect here because I can see it, they can see it and it keeps me honest.”

Wedel has worked for many years trying to send these messages by creating her brand. She is still continuing to send her message of sustainability in fashion.

“I think sustainability is imperative,” Wedel said. “I don’t really see that there’s another option and so it’s the framework of which I’m operating but I’m not just doing that.”

As Wedel continues to send her message of sustainability through Coral Marie, she is continuing to design her garments, through a very strategic process.

“First, I always sample because I make samples to decide specifics and get everything worked out,” Wedel said. Then I use the samples for photo shoots or runway shows. From there, then I make decisions about what I’m going to produce quantity wise in each size so I have to then grade the patterns to create all the sizes from the initial sample.”

After Wedel decides what she is going to produce in quantity, she produces her garments in a much slower process.

“I cut by hand here in my studio all the pieces and they’re constructed by me primarily,” Wedel said. “I occasionally do get some sewing help. l primarily use imported cotton because the United States has a very small market for growing cotton.”

Cotton heavily pollutes the environment, so Wedel prefers to use other sustainable blends.

“[Cotton] is one of the biggest polluters, so I use a lot of other sustainable blends,” Wedel said. “I do use some recycled polyester, which means they’re either working from PG plastics or refunding polyester from previous broken textiles. I also use occasional blends with bamboo.”

There are more sustainable blends for fabrics, such as polyester. However, when people throw away their clothes, the plastic will most likely end up in the ocean.

“Comfortable clothes are emerging as a source of plastic that’s increasingly ending up in the oceans and potentially contaminating seafood, according to Gulf Coast researchers launching a two-year study of microscopic plastics in the waters from south Texas to the Florida Keys,” according to Jennifer Kay of the Associated Press in an article posted on Business Insider.

Wedel is very passionate about her career and she continues to be inspired by different things everyday to create new garments.

“I am a curious person,” Wedel said. “I love looking at things and so many of my inspirations really come from my surroundings. Part of the reason I am where I am is I love being in the natural world and so I pull a lot of my inspiration from my direct surroundings, emotions, feelings and relationships.”

If you are interested in slow fashion and want to check out Coral Marie, you can visit her website or the store at 4367 OH-681 N, Albany, Ohio.