Behind the Lumberjack Luau 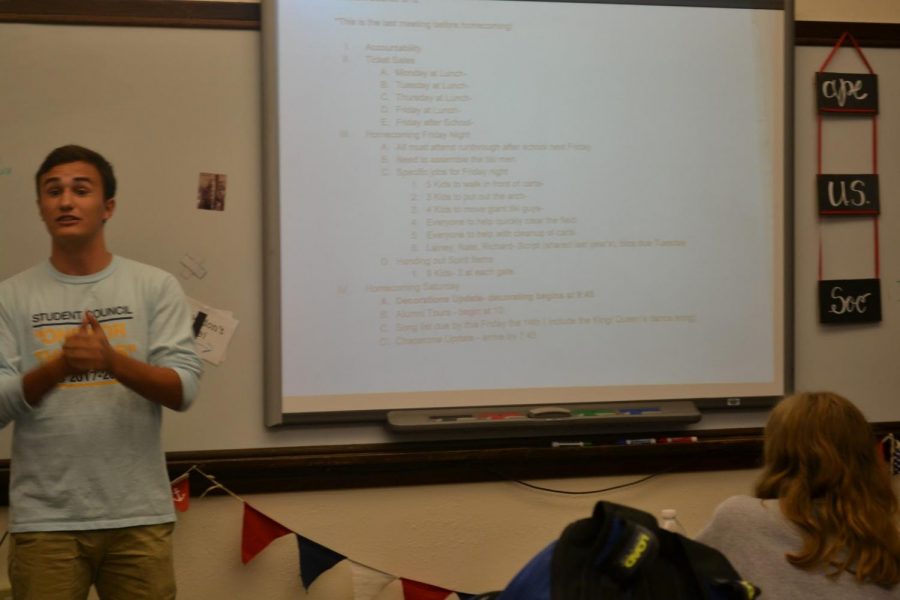 Student council members had their last meeting before Homecoming in Mrs. Hill’s classroom on Sept. 12 to complete preparations for the weekend of events.

The council is in charge of the planning and execution of all homecoming related elements, from the football game on Sept. 21 to the dance on Sept. 22 and more.

“I didn’t realize all that student council did for homecoming, all the planning that goes into it, and also all the preparation for the football game,” Ellie Duwell, the sophomore class president, said.

One of Duwell’s favorite parts of homecoming preparation is choosing the theme. This year’s theme is Hawaiian. The theme affects many other elements of the events as well.

“Every grade will come up with three or four theme ideas and then we’ll vote,” Duwell said. “We also consider the decorations, will the company be able to decorate for that?”

Other options considered for the theme were fairytale and red carpet.

Senior class president Jack Henry was in charge of preparing the song list for the dance. To do so, he sent a Google form to all students in the 10th, 11th and 12th grade. 100 people responded, and Henry and council volunteers on a music committee noted the songs with the most requests, which would be played before less asked-for songs.

“A lot of modern rap songs were very popular,” Henry said. “For example, ‘Momamba’ got the most hype. Other popular songs, the classics like ‘Come On Eileen’, ‘Cupid Shuffle’, stuff like that are really popular.”

In choosing other songs, they would consider whether it would be good to dance to, whether it was popular and what would generally be appropriate for the occasion. In the end, however, song choice was up to the DJ. The DJ is chosen by council advisors.

“Usually we just try to find a reasonable price and someone who we’ve had before or had really good reviews,” Henry said in regards to picking a DJ.

Homecoming Queen and King are also chosen by the public. In homeroom, the council gave seniors a list of all 12th grade girls and boys in order to cast five votes for each category. The top five pairs of guys and girls were voted on again and the winners, Charlie Ross and Agatha Schaffer, were announced at halftime of the homecoming football game.

Prior to the announcement, the contenders for the positions of king and queen paired up and decorated a golf cart however they wanted. The carts were driven onto the field by council volunteers during halftime at the football game.

“You choose a pair if you’re on court and then you just come up with the idea, and you have to do it all on your own,” Henry said. “They can do whatever they want with it.”

Before the game even started, nine council members handed out spirit items, including leis, to high schoolers at the entrances to the field. Three members were tasked with putting up an arch at the start of halftime for the candidates to go through, and as soon as halftime ended, all available members had to quickly clear the field, clean the carts, and pick up trash.

“We all have separate little jobs,” Henry said. “We have escorts for the golf carts because little kids, and even seniors, try to jump out to get candy. We have people that bring the props to the middle of the field, we all clean up at the end, we have people announcing.”

The next morning around 9 a.m., members met in the West Gym to begin decorating at around 9 a.m. They put up glowing disc tables, lights, arches, large tiki men and other theme related adornments in the entrance, stairways and West Gym.

“We always hire a company for it that does a theme for us,” Henry said. “They do behind the DJ table and usually in the hallway, but we always have those lights you see at the dances, light tables in the gym. We have small decorations, we usually do the entryway.”

At 10 a.m., 12 members began student-lead alumni tours around the school. These students were to dress “nice and Oakwood-y” to have a good impression on the alums.

“Usually alumni tours in the past, they pick classes, like reunions, or anyone who wants to come to tour the school,” Henry said. “We set up at stations around the school and just tell them what it is now. But this year we actually did personal tours and took them all around the school.”

The homecoming dance took place from 8 p.m. to 11 p.m. After the dance ended, the council members stayed to clean up the remains of the festivities.

All specific positions and jobs, including selling the $20 dance tickets, are undertaken by volunteer members of the council.

“Juniors and seniors, they pull most of the weight I want to say,” Marley Wiemers, a sophomore member, said. “Mostly because they can drive.”

Homecoming is a busy time for all of student council, however.

Wiemers said, “I think Homecoming’s like a particularly big time because  not only do you have to deal with the dance but you also have to plan the game, you have to get like the spirit stuff they hand out for that, and then you can volunteer to do alumni tours.”