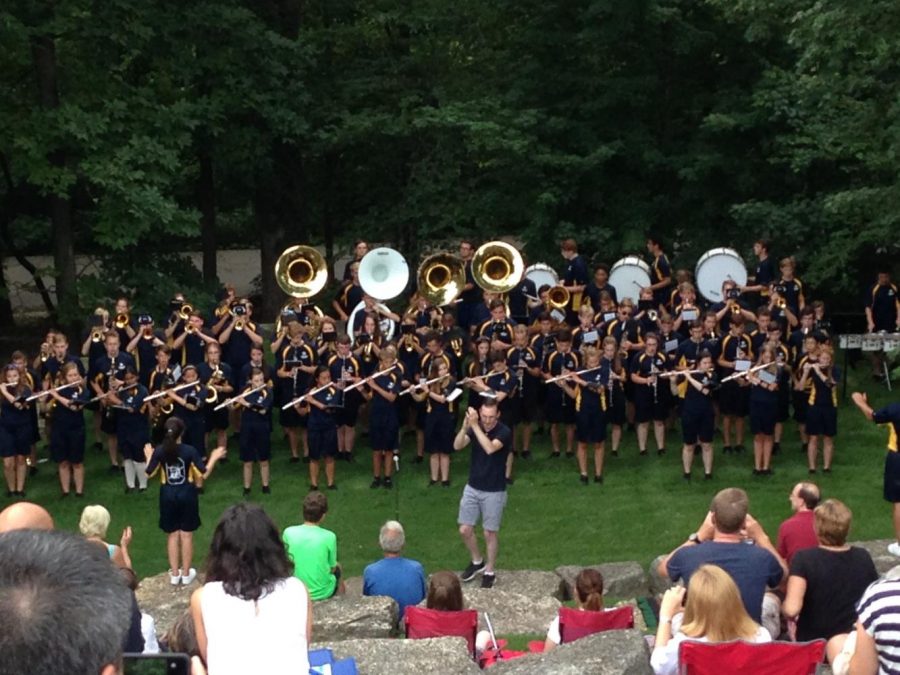 Marching band members play for their families at the band camp picnic.

Marching band plays an essential part in fostering school spirit. Students from ninth to twelfth grade play music at games during the football and basketball sports seasons to rally support for the home team. From football games to pep rallies, band members are always involved. However, most people don’t realize how difficult marching band can be.

“Not only do you have to read music off a lyre, you have to march in time, know where you’re going next, and play music,” Paisley Bokros (10) said.

Most of this hard work happens at rehearsal, which occurs each Monday and Friday at lunch, and in the evenings on Wednesday. The band also practices for a week towards the end of the summer at band camp.

“Most of learning how to march happens at band camp,” Zach Brennaman (11) said.

Learning to march entails many things, from learning the music to learning how to move in formation. To create a unified look, it is important that each player steps with the same foot, takes the same size steps, and stays in line, all while playing in tune.

“You have to memorize things quickly,” Brennaman said. “The new kids are picking things up pretty quickly.”

Band camp also helps incorporate freshman and other new people into the band, and serves as a week-long review for older members. The camp culminates at the end of the week with a picnic and performance for the band members and their families.

“It’s important to learn when to focus and not act stupid,” Lane Bokros (9) said.

This summer, band members learned what would be the foundation of three new shows. Those three shows include songs from Motown and Metallica, as well as classic pop songs such as “Don’t Stop Believing,” “Sweet Caroline,” and “Take on Me.” Along with new songs, members learn new formations as well to complete the program, such as the box slide. A box slide consists of 32 players making a box shape that is eight by eight people, while performing a step sequence that rotates the shape.

“It’s hard, but it’s fun,” Bokros said. “I like being in the stands at games because I’m with my friends.”